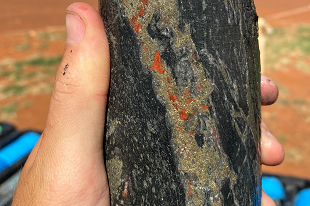 Hosted by Geoscience Australia (GA), MinEx CRC and Northern Territory Geological Survey (NTGS) as part of the AGES 2021, this informal and hands-on workshop will give participants the unique opportunity to view selected intervals of stratigraphic drill core from the East Tennant region, an exciting new exploration frontier east of Tennant Creek, NT.

During the workshop, GA will discuss:

The East Tennant region was recognised as a prospective and underexplored frontier during the first phase of the Commonwealth-funded Exploring for the Future (EFTF) Program through the integration of legacy and new EFTF data.

A campaign of 10 stratigraphic drill holes was completed in December 2020 as part of MinEx CRC’s National Drilling Initiative (NDI) in partnership with GA and the NTGS. The drilling data were rapidly released to stakeholders on 4 March 2021 via the EFTF portal and NDI portal and GEMIS.

The stratigraphic drilling campaign was designed to deliver new knowledge of the regional geology and mineral systems potential of the region. The basement rocks intersected by the drilling include felsic intrusive and extrusive rocks, deformed siliciclastics and carbonate metasedimentary rocks and a previously-unrecognised basin containing coarse clastic sedimentary rocks. The metasedimentary rocks are comparable to the Paleoproterozoic Warramunga Formation, which hosts mineralisation in the Tennant Creek mineral field, and contain mineralogical and geochemical evidence of comparable mineral systems.

The core from the East Tennant program will be open file on 23 April 2021. Read more to access the NTGS drill core library.