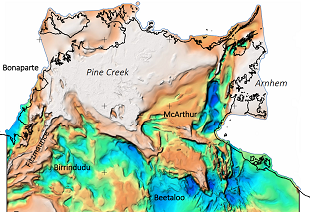 The Northern Territory SEEBASE® and GIS provides an upgraded, high resolution regional map and grid of the depth-to-basement that defines the geographic extent of subsurface basins systems across the Northern Territory.  The SEEBASE® study also includes an interpretation of the tectonic evolution of the basement and basin systems, basement composition and an estimate of present-day heat flow.

The Northern Territory SEEBASE® and GIS was generated combining previous studies with updated and new data to cover the entire Territory. The study was undertaken by Geognostics Australia Pty Ltd on behalf of the NTGS and includes contributions of past work by Santos Limited and Pangaea Resources Limited. Proprietorial seismic data was also make available for the study by Empire Energy and Sweetpea Petroleum.