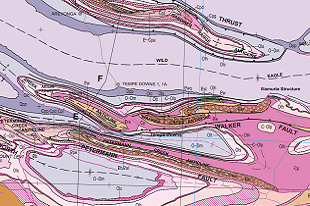 Covering an area of approximately 150 000km2 in the southwest corner of the Territory, the products include a map, GIS and explanatory notes. They deliver a detailed interpretation of the stratigraphy and structure in the western part of the Amadeus Basin. In particular the study shows that the distribution, character, and timing of faulting and folding are closely related and that the basin has formed as an intracratonic fold-and-thrust belt. Discussion provides insight on the effects of two syn-depositional orogenies (ca 630–470 Ma Petermann Orogeny and ca 450–300 Ma Alice Springs Orogeny) and halotectonics on the development of the western Amadeus Basin. The work also builds a foundation for the ongoing interpretation of the eastern part of the Amadeus Basin.

NTGS delivers pre-competitive geoscience products funded as part of the Resourcing the Territory iniative, with these products coming under the theme of stimulating exploration in central Australia.