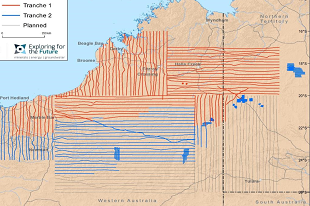 The AusAEM 02 WA/NT, 2019-20 Airborne Electromagnetic Survey package contains processed data flown over the north-west part of the Northern Territory and across the border to the Western Australian coast. The survey was conducted by Geoscience Australia, in collaboration with the Geological Survey of Western Australia and the Northern Territory Geological Survey.

It follows on from AusAEM Year 1 NT/QLD: Airborne Electromagnetic Survey.